What's is this exhibition about

Epigraphy seeks to collect and study all the documents written on long lasting materials such as stone, lead, marble, silver, etc. These documents, which have reached us in many ways but mainly as archaeological remains, carry in fact precious information on the past, on people who lived thousands of years ago, on institutions, on customs now almost entirely lost. Reading inscriptions requires very specialized skills. This exhibition will give you an idea of what inscriptions can tell us, what types of monuments and text researchers study and some of the stories they unveil.

Inscriptions are all around us today (think of road signs!) and so they were in antiquity and especially in the so called greco-roman world, a world in which writing was a spinal part of the society and had already lost some of its original magic to become a fully functional part of society. Paper was not there quite yet but people wrote on almost everything, raw material, prepared surface or manufactured objects and monuments, from tiny fibulae to triumphal arches.

Want to get started now? Go ahead and start the visit!

While each inscription has its very special story to tell also the totality of inscriptions or selected groups of texts can tell us a lot when studied as a group. For example, milestone inscriptions help also to trace ancient roads.

The monumental character and durability of inscriptions made this an ideal medium which has been used mainly by the emperors and their families, but then also from official office-holders to highlight their achievements. Depending on their purpose inscriptions can be found on a wide variety of memorial types: as an imperial triumph inscription on triumphal arches, as honorary inscriptions on statue bases, as building inscriptions on newly laid pavements, as official information on distances on milestones.

Dedications and votive inscriptions attest also that normal people used this medium because of its powerful impact on the reader and its long lasting.

But Greek and Romans, as well as Persians and Carthaginians wrote on many more types of objects in many ways and for very different purposes. Eventually even without a purpose. We find stamps on mass production objects as tiles or bricks, on vases, on jewelry, on toys, etc. There are also graffiti which are known from antiquity and are a very important source of information, from Pompeii, Herculaneum and Ostia for example, but also from many places in the North African provinces of the Empire. 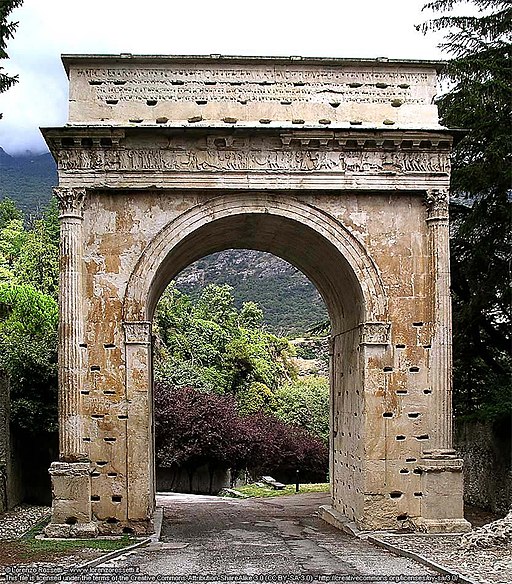 How many inscriptions in the world?

How many inscriptions are out there? Epigraphy has been described as “the fountain of eternal youth of ancient history”. And this seems to old true since as many as thousands of inscriptions are found each year around the Mediterranean (and into it, as you will see with the Egadi Rams). Athens alone has a wealth of over 20.000 Greek inscriptions, Rome has more than 60.000 alone, Ephesus and Salona (Split) being the next richest places for inscriptions, in strong competition with some other of the most important cities of the ancient world, which often have 3-7 thousands inscriptions each (and counting if excavations continue). Only Mount Testaccio, which is a mountain of pottery slabs, contains tens of thousands of inscriptions, which require a full equip of scholars to study, and some of which will actually never be excavated (virtual exhibition here). The total estimated number of roman inscriptions known, excluding those inscribed on objects or repetitive (as stamps) and all coins which are studied by numismatist which look also at the inscriptions on them, in a time range including only the lifetime of the western Roman Empire is around 300.000. An estimate for the Greek inscriptions is more complex as there are fewer comprehensive databases accessible online for search which can provide such overview information, but the IDEs project at Duke has calculated that around 200.000 are known. A considerable amount of inscriptions in other scripts (Celtic scripts, local Italic scripts, Hebrew, Punic, Egyptian scripts, etc.) should also be added to these figures, which is again quite hard to estimate. An additional count of all ancient inscriptions produced in the ancient known world, would easily reach a count in millions.

Want to know even more? Click here for some additional details.

Room 3: Objects and the relation between image, text and context

Links to other related resources