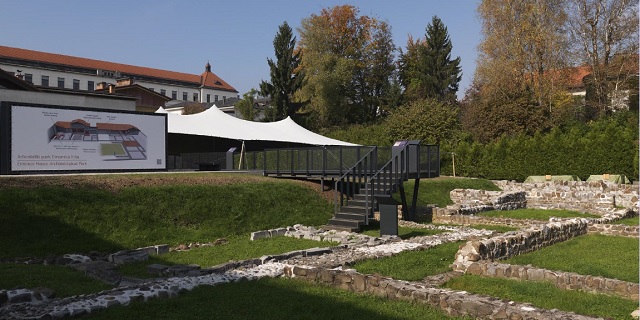 Two papers were presented by Marjeta Šašel Kos at two conferences in November, concerning the EAGLE project and Roman inscriptions from Emona.

Not much is known of the pre-Roman inhabitants of Emona, therefore it is all the more important to collect all available evidence. Epigraphic documents from the Ig area are abundant, containing a large selection of indigenous personal names, which, in contrast, are rather scarce at colonia Iulia Emona, but not as scarce as it has been assumed. The tombstones with indigenous names actually represent 10.7 % of all Emonian grave monuments with identifiable names. At least eight monuments with epichoric anthroponymy can be regarded as having been undoubtedly discovered at Ljubljana. The Emona–Ig areas were closely interdependent in the pre-Roman period and it was only with the foundation of a Roman colony at Emona that the earlier connections and identity of the pre-Roman inhabitants of Emona were forcibly disrupted, relegating the majority of them to the margins of existence.

However, there were some who managed to integrate themselves into the Roman society, earning enough money to erect a funeral monument for themselves and their families. This was the case of Buio and his wife Lasciontia, as well as of Enno and his wife Cetetiu. There were native families who were given citizenship, transforming their personal names into a gentilicium, as, for example, the Vibunnii. These names and social connections of their bearers shed most interesting light on the life at Emona before it became a Roman city, as well as on various ways of integration, when the former inhabitants had to live side by side with the newcomers.

Conference at Ljubljana (November 5 and 6), in Slovenian: “Cultural centre Križanke at Ljubljana. Commemorating 300 hundred years of completing the baroque church of St. Mary (Mariahilf) of the Order of the Teutonic Knights (Der Deutsche Ritterorden):

Several inscriptions from Emona, all of which were stored in the lapidarium of the National Museum, were recovered during large-scale excavations in 1909-1912 of the Emonan remains conducted by Walter Schmid on the property of the Order of the Teutonic Knights (Der Deutsche Ritterorden). The city of Ljubljana purchased a large part of this property in order to build a state technical school for arts and crafts. The estates in Ljubljana, known as “the German property”, and situated within the limits of Roman Emona, had most probably been donated soon after 1228 by the Carinthian Duke Bernhard II of Spanheim to the Order of the Teutonic Knights, and they remained in the possession of the Order more or less unaltered up to the beginning of the 20th century. In previous centuries, 16 inscribed Roman stone monuments were discovered on the German estates, most of which are lost. The most interesting of these were presented in the paper, notably the tombstone of the Cantii family from Aquileia and the funerary stele of one of the rare known town councillors of Emona, Marcus Titius Tiberius Barbius Titianus, now in the Lapidarium of the Kunsthistorisches Museum in Vienna.