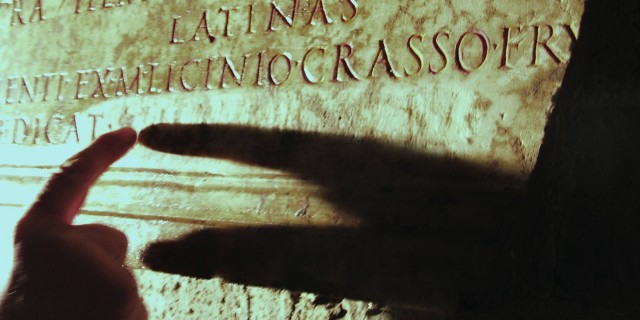 On June 21, 2019 the operation of updating the EDR inscriptions in EAGLE was completed. This project, which was funded by IDEA in the framework of the first call for small projects in digital epigraphy, led to a significant improvement in the quality of the data of other EAGLE database. The work of recognition of the texts based on the comparison of the records of the Italian inscriptions present in the Clauss/Slaby Database (all equipped with TM) allowed to recognize 6 double records in EDR and 12 double records in Clauss/Slaby. The doubles TM were communicated to Trismegistos who promptly removed them. On this occasion, 1089 new TMs for EDR inscriptions processed after 2016 were also added to the EAGLE database.

IDEA members are now invited to apply for financial support for the implementation of small projects coherent with the scope of IDEA’s activities, as stated in the Article 5 of our Charter:

Art. 5 – “The goal of the association is the promotion of the use of advanced methodologies in the research, study, enhancement, and publication of “written monuments,” beginning with those of antiquity, in order to increase knowledge of them at multiple levels of expertise, from that of specialists to that of the occasional tourist. In order to reach its statutory goals, the association promotes, organizes, and manages conventions, conferences, exhibits (including virtual exhibits), prizes, and training courses (including online courses); it conducts editorial activities; it promotes and supports the maintenance and efficiency of the portal created by the European project EAGLE (European network of Ancient Greek and Latin Epigraphy); it participates in and promotes the participation of its members in projects and initiatives, including in collaboration with third parties; it promotes initiatives in the interest of its members; it performs and encourages studies and research; it collects data and news of interest to the activity of its members; it carries out consultations in favor of its members; it more generally carries out all activities useful for the achievement of the goals that the association proposes.”

The next deadline for sending the proposals is September 30th, 2019 and a maximum of 1,000 Euros will be granted.

To subit a proposal, please send an email to info@eagle-network.eu. Every application should include a budget breakdown and an explanation of how their project fits IDEA’s priorities.

The Board will evaluate all the proposals received by the deadline and communicate the winner(s) of the grant two weeks after the deadline.