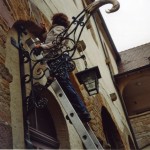 This is the story of a document and of many people. The document is a red stone in the vault of a small church in Sinsheim (Germany) that no one would look at really; to the expert eye of the epigraphist, however, even this apparently unimportant stone with a small cluster of scattered letters (“RIO / SION / L”) is sufficient to raise intriguing questions and open up a window on the Ancient World. This is the story of a document and of many people. The document is a red stone in the vault of a small church in Sinsheim (Germany, Roman province of Germania superior). A stone no one would look at really. Unless for epigraphers who have a special eye for these stones and look for them also in buildings where they are often reused as in this example. If one looks closer in fact, there is something written in the red stone, upside down. Few letters. If the light is good you can probably figure it out and ask your mind to do the rotation and that will read “RIO” and “SION” in the upper (i.e. the second) line. Well done. One who is acquainted with inscribed document can also tell you that there is a “L” just a little bit more spaced down and that there is a small hedera (a leaf symbol used to separate words) after “SION” (or up, depending on the perspective).

And now? When an epigrapher finds such document and reads it that is just the beginning of the work and if you give it a try you will see also that this is no easy task. In the case of this fragment the story goes back of almost a century and each of its parts contributes to see behind the letters a glimpse of the life in the Roman world. The form of the letters tells archaeologists and epigraphers that this is a Roman inscription.

The fragment RIO/SION/L has been there visible for about 300 years, i.e.  after the demolition of the Romanesque aisles of the church, and was only mentioned in the notes from the excavation of the medieval settlement. There was also a letter from 26 April 1936 in which Roman remains where mentioned to a scholar in Heidelberg, among which a relief with a female figure. Then we have two new remains of Roman period from the area. But where is the relief? There is often no obvious answer to such question. And it takes the expertise of curators to find out any possible match in records of finds which are often cryptic and subject to movement, changes, and all that can happen to a stone. Eight letters and already four researchers involved, with a great deal of time and effort and knowledge.

An image of the inscription in its present context (Photo: © F. Feraudi-Gruénais); see also HD064258

The female relief is also important because it may help in understanding what the inscription tells, but it is from the text that one must begin. The first observations regard the overall structure. There must have been something to the left and right and the L is not centred neither aligned with the above. Finally the hedera in the second line signals a world ending there. What can the L alone tell us? For an epigraphist this is easily recognized as part of an abbreviated formula which is often found as the last line of an inscription. An L can appear for example in VSLLM which stands for votum solvit libens laetus merito, and it would then be a votive inscription. Or it could be part of STTL which stands for sit tibi terra levis and would make this a grave stone. Any is possible. But the interpretation of the relief and the fact that there is still space for text further at right, tells that VSLLM is more probable. This also explains why it is not aligned. If we imagine more stone on each side, broken away for the secondary adaptation in the arch, we can figure out the five letters evenly spread across the width of the longer text above. An epigrapher would find many more parallels and test each possible solution in its likelihood, but in this case we can be happy with that. We are probably looking at a remain of an inscription set up by somebody in Roman time as a dedication to some divinity.

So which were the divinities prised locally? All, and if not, many. How to find out? From the other inscriptions better preserved it is known that a votive inscription usually has the name of the divinity first, then that of the dedicator, and finally the abbreviated clause. The letters in the first line could be part of this name: RIO could then be part of MercuRIO, which is well attested in the area, second only to Jupiter. But we still have the problem of the space on the right: if the divinity honoured is Mercury, with whom is he honoured? Here comes back in play the female relief. What about a goddess? The Rhine-Main-Neckar region has several attestation of a local goddess often honoured with Mercury: Rosmerta. Could this perhaps be the pair for our inscription? It could. And there is no better guess which can be done for now.

A small stone, with few upside down letters, thanks to the work of epigraphically as well as archaeologically skilled scholars can then became a speaking document and read in its context, from the narrowest to the larger, can tell us perhaps of a sanctuary where somebody venerated Mercurius but also the local goddess Rosmerta and perhaps put up a monument with also a relief, nicely painted to show is devotion to the two divinities. We don’t know, but perhaps this was not the only one and this might be the document of much more activity in this place. Perhaps the answer is behind the other red blocks in the arcade of the church, perhaps still underground.