In August 2013 we went looking for some inscriptions among which this one. Getting to the place wasn’t easy. But we arrived[...] 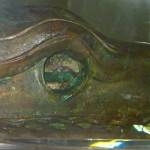 The Trophy of the battle of Platea

Sulthanamet Square in Istanbul hosts part of one of the most important monuments survived from ancient times: the trophy of the[...]

CC by on Jan 22, 2016
Keywords: , , , , ,
Lucio Cassio Filippo, his wife Atilia Pomptilla together with Filippo’s father were exiled to Sardinia by the Emperor Nero, probably because they were opponents of his power. They spent their lives in Karalis (modern Cagliari). Pomptilla and Filippo, in spite of their condition, lived happily together for 42 years, unfortunately Filippo fell seriously ill during the exile (because of malaria, a common disease because of the unhealthy environment in some places of the ancient Sardinia) and his faithful wife, so in love with him, asked the Gods to let her die instead of her husband. Even if it seems impossible, her prayers were fulfilled: Filippo healed and she suddenly died as in the myth of Alcestis. Filippo also died a little later and his ashes were preserved close to his wife’s. The incredible story of this love is witnessed by the inscriptions of the so called “Viper’s Cave”.
Page 3 of 8«12345...»Last »